South Africa has always had a small but dedicated Renault following, and to its credit, the automaker has produced moments of inspirational design and performance over the years. Their persistent presence in racing also keeps the brand uppermost in mind, and no one can take away what they have achieved on the global F1 circuits. It might surprise many, therefore, to know that it is a car brand that almost was not.

The legend states that Renault cars began as a personal ambition, with a wager thrown in for added impetus, and this particular urban legend happens to be true. Having been toying with the challenge and then sucked into a wager that he could not drive up Paris’ steepest road, Rue Lepic, Louis Renault set about building a car that could unambiguously do just that. That might not seem like much of a challenge to us, but this was the late eighteenth century, and cars still inspired stares of awe, much like UFOs today. Opting for a direct driveshaft and a three-speed gearbox, Monsieur Renault drove merrily up the hill one fine day in 1898, and Renault the automaker was born. Indeed, so next-level did his feat seem that a small number of onlookers placed orders for their cars right there and then.

Ever since that, Renault has been a brand known for zippy efficiency and some innovative design. Mechanics have moaned about the engine construct being inaccessible, and customers have moaned about spares availability over the years, but these aspects have not dimmed those loyal to the automaker and are more indicative of pushing the envelope a little than any poor manufacturing. Renault has had its own impetus, while still being largely aware of the competition. Today, Renault spares supply has become a cinch, on par with any other brand’s availability, as long as you know where to find a Renault spares supplier with a good stock of Renault parts.

When Renault Invented the Hatchback

“We invented the hatchback” is a pretty bold claim for any modern automaker to make, except that it is again completely true of Renault. Photographic history does not lie – the emergence of the modern hatch can be seen in old photos of post-WW2 Renault designs, when the company set about building cars for the booming global population. Automakers of the day were very prominent commercial entities in any country, being a visible and hi-tech symbol of a nation’s prowess. More than that, the speedy mobility, personal freedom, and logistical potential afforded by automobiles together formed the equivalent of the Internet today – a total game-changer.

Social change was both fed and anticipated by automakers, who tried to design innovative and more user-friendly cars with enhanced performance and efficiencies. Renault’s early rear-engine sedans were soon surpassed by five-door cars the automaker began producing to better address people’s more modern lifestyle needs. The company did indeed produce the first hatches to hit markets anywhere in the world, and if you believe Renault historians, the company invented the SUV too! Certainly, modern hatches’ genesis can be found in Renault’s “blue jean” Renault 4, given the moniker because of its widespread uptake and constant presence on the roads, as well as its claim to fashionable motoring – the right look, feel, and attitude for liberated motorists of the time!

How a French Car Became an “American” Icon, and How Renault Nearly Was Not, Again 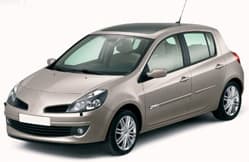 Few countries or entities can claim to have escaped the impact of American youth culture of the 1960s. Teen rebellion surged as young adults spurned the job-for-life and hard work mentality of their parents. One man, Bernard Hanon, is credited with the development of one of the most famous Renaults ever – the Renault 5. Still today visibly obvious, the Renault 5 was a singular contributor to modern hatchback design and build. Hanon was exposed to American angst while lecturing on campus in New York, and when he returned to France, he found that the same malcontent and social dissatisfaction had infected European populations too. Parisian students were rioting, and protests dotted countries around the globe. Design sketches from the 1960s finally came to fruition in the early 1970s, when the first Renault 5 rolled off the production line – the automaker’s statement of support for the angst of the time.

Prior to this, in 1911, Louis Renault had paid the Ford factory in the US a visit, mostly to witness first-hand the process of mass production. This proved to be a pivotal experience, as when the Great Depression hit in the early 1930s, Renault was building high-end cars for an elite few who could afford it, and suddenly so very few could. Wealth withered, and it seemed Renault was on its way out of business without its client echelon. Although it took years to swing to the lighter and more easily assembled cars mass-production enabled, in the late 1930s, Renault manged to quell labour discontent and come out of the gate as direct competition to Citroën and others, by starting to build affordable and stylish mass-produced vehicles.

Were it not for such a dramatic shift in business model, Renault’s company would never have seen the 1940s. It is easy to look at those facts and figure it was a mild shift, but it was in fact the equivalent of cannibalising your business on a wing and a prayer, hoping that what comes out the other side is going to be better than ever and keep you afloat – a scary proposition, even today.

A.S.A.P. Spares Is a Renault Spares Supplier with Game!

A.S.A.P. Spares stocks a huge range of car parts, it is true, but we are also Renault nuts who challenge anyone to beat our standard stock availability. We share Renault drivers’ enthusiasm and feel your pain! Avoid the merry-go-round of auto spares outlets who do not really care for the brand and do not really know much about it – come to a pro Renault spares supplier for great service, availability, and prices – come to A.S.A.P. Spares, and we will keep you moving.

Search by description or Part no