When A.S.A.P. Spares started out in 2001 in Pretoria, Gauteng, we only sold Opel spares because we love the brand. Even though we have expanded our service offering to now also supply spares for Citroëns, Peugeots, Chevrolets, Renaults, and Suzukis, we are still the go-to supplier in Gauteng if you are looking for new or used spares for your Opel and we are dedicated to supporting this brand in South Africa. And who doesn’t love Opel? The brand has such a long history in South Africa and such a loyal band of supporters so, if you think the brand has lost some of its lustre in recent years, let’s recap the glory days, the decline, and the return to form of this great brand, just to put things in perspective and reassure you that all is, in fact, well.

Opels have been on sale in South Africa for longer than most people can remember, even if many of its products were branded with the Chevrolet bowtie during the ’70s in South Africa. Those Chevrolet Commodore 4100 and 3800 models were, nevertheless, Opels by another name with American inline 6-cylinder engines. Fast forward to the ’80s and Opel really started to come into its own with roomy, efficient, and modern cars like the compact Kadett and Ascona, the medium-sized Rekord, and the large Commodore and Senator cars. They had something for the enthusiast too, the powerful, fuel-injected Kadett GTE and Ascona GSI models filling that niche and the 5-speed manual Commodore with its 132 kW 6-cylinder engine delivering surprising power and pace. Top of the tree was the auto-only, luxurious Senator. 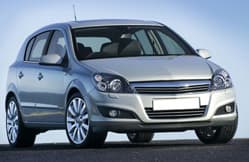 The ’90s were, arguably, the highwater mark for Opel with some unique locally developed models seeing the light during the Delta years. Who could forget the V6-engined Opel Rekords? Delta raided the GM parts bin for these unique South African flagship Opels, borrowing the independent rear suspension of the overseas Omega, the dashboard of the top-of-the-line Senator, and the 3,8-litre V6 engine from the Australian Holden Commodore to produce powerful, comfortable executive cars that punched well above their weight (and price). Then they went even further and took the 150-kW turbocharged 2-litre engine from the all-wheel-drive overseas Calibra and installed it in the local Kadett and Astra tS front-wheel-drive models. The powerful engine and limited-slip differential made for mercurial handling and viscous torque steer, but the cars were blistering pocket rockets and are rare collector’s items today.

The GM years that came after Delta were not kind to Opel. The true enthusiast’s cars were few and far between and the brand suffered from a serious lack of marketing as the Chevrolet brand was put out front and promoted. When it became unclear what would happen to Opel and GM started dabbling with selling off the brand, it virtually ground to a halt in South Africa and was set to leave the country with parent company GM when the latter withdrew from the local market. However, the PSA Group (Peugeot-Citroën) stepped in to save the brand internationally and, therefore, also assured its future in South Africa.

Now under French custodianship, Opel is back in full force with a range of up-to-date products and ever-popular crossovers. Gone those GSI, V6, and tS models might be, but crossover sales volumes are what the brand needs right now in current-day South Africa. Sales have been increasing and with an all-new Corsa waiting in the wings for local release, Opel will have the compact-hatch market covered too. Things are looking up and can only improve from here. And while you were reliving all these memorable Opel years, keep in mind that A.S.A.P. Spares was there all the time, selling Opel spares to Opel drivers all across Gauteng to keep their beloved cars going through good and bad times.

But as we’ve intimated before, we don’t cater for just Opel. We also sell new and used auto parts for all the PSA Group’s other brands namely Citroën (and sub-brand DS) and Peugeot. Not only that, but also for the remaining French automaker, Renault, as well as for Suzuki. From our premises in Van der Hoff Road, Pretoria, we serve motoring enthusiasts for all six these brands hailing from across Gauteng and, as Chevrolet slowly starts to fade from the collective local memory, we will ensure that there are parts available for those Aveo, Cruze, Captiva, and Spark models that still roam our roads for as long as these cars are readily available as salvageable wrecks for our scrapyard.

With a steady supply of both new and used auto parts at a substantial saving over the prices that the agents charge, you can afford to keep your elderly car running on a budget, regardless if it is a 1997 Opel Astra, 2001 Peugeot 206, or 2010 Suzuki Swift. And if we do not have a part, all is not lost, because we might still be able to source it from elsewhere in our supplier network. And, of course, given that we always need wrecks to replenish our scrapyard, we will pay a fair price for your written-off car of one of our brands if, for some reason, you are stuck with it and cannot claim from insurance.

Search by description or Part no